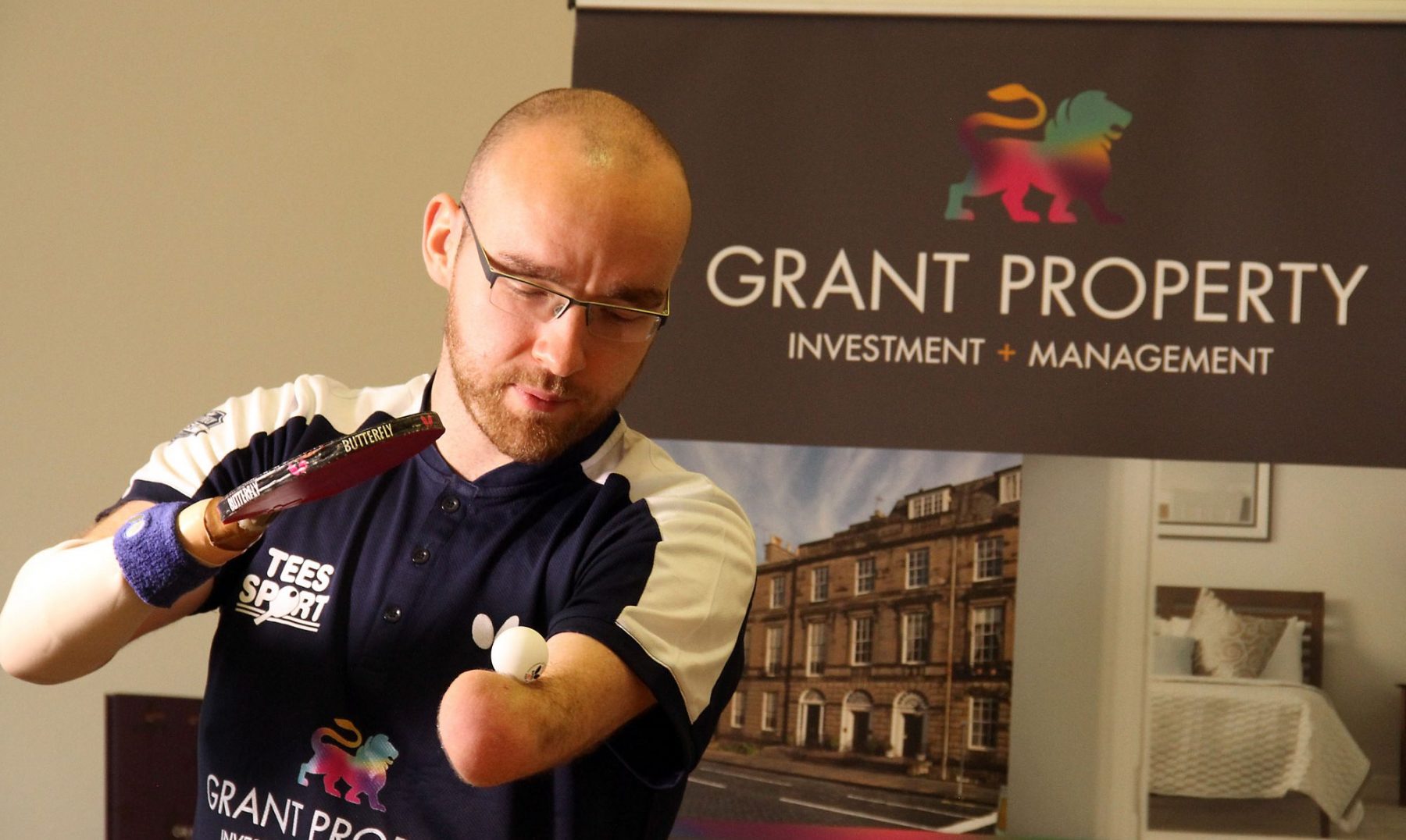 Martin Perry, newly sponsored by Grant Property, talks about his fantastic month winning a haul of medals and hitting his highest ranking to date:

“October was a massive month for me. It began with the European Championships which were held in Laško in Slovenia and ended in Sint-Niklaas in Belgium. This years European Championships was to be my first ever euros. It kicked off with a very tough group which had the current Paralympic Champion and a strong opposition from Switzerland. It was baptism by fire in my first match against Peter Rosenmeier who won Gold in Rio 2016. Despite losing 3-0 I felt I was playing well and was looking forward to the remainder of the competition. My final group match was one that would decide who progressed to the next round, myself or Valentin Kneuss from Switzerland. I triumphed 3-0 with again what I felt was a good performance. In the next round I faced, Ukrainian, Victor Karp. A very experienced player and ranked inside the top 10 in the world I knew this match wasn’t going to be easy. It wasn’t. I fought incredibly hard and took the first set but Victor was too strong for me on the day and he progressed winning 3-1. The obvious feeling of disappointment of being knocked out of the competition in the last 16 set in, yet I was still reasonably pleased with my performance and I knew that I still had the team event to play with my team partners David Wetherill and Paul Karabardak. After winning Bronze at the 2017 World Team Championships alongside Dave & Paul, I knew we had a chance of doing well. We got off to a great start winning our first match 2-0 and as the tournament unfolded before we knew it we were in the final facing Croatia. It was Croatia who had beaten us in the semi final of the Worlds earlier in the year, so we knew the final was to be hotly contested. After taking the doubles and leading 1-0 in the match it was Paul v Pavao Jozic in the next team match. Jozic lead 2-0 and looking on with Dave and our coach Andrew (Rushton) we knew Paul still had a chance to come back into the match. Paul took the next set to make it two games to one in favour of Jozic. The GB momentum swing was starting to take over and our bench was growing in spirit and in vocal volume. Paul levelled the match at 2-2 and we started to really believe we had a chance of wrapping up the final 2-0. The match concluded with Paul winning 3 consecutive sets and the 3 of us on the bench erupting and charging the court to embrace Paul as we were crowned: Champions of Europe! It was a great start to the month.

The final week of October took me to Belgium. Being 3rd seed for the competition I knew I had a chance to take a medal. I managed to progress from my group without dropping a set and make it into the quarter-finals later on the opening day of competition. It was there I had to face a young German that I had not encountered before. I managed to win 3-1 and progress to the next round the following day. It was in the semi-final that I was to face top seed, Romanian, Bobbi Simeon. We had a fantastic match! I took the first set, 11-9, Simeon then levelled the game at 1-1 with another 11-9 set score. I went on to lead 2-1 before again Simeon who is 8th in the world levelled the match at 2-2. In the deciding 5th set, Bobbi lead 3-0 before my coach Matt called a timeout, buying us a 1 minute break to have a chat and discuss tactics as well as break up Bobbi’s momentum. The timeout proved crucial as I went on to win the set and match 11-5. In the final of the singles event at the Belgian Open, I had to face my teammate Paul Karabardak. We had a fantastic match that could have went either way, but it was Paul who came out on top winning 3-1 (13-11, 9-11, 11-9, 11-6). We embraced after the match and left the court as teammates.

Next up was the team event in which I played alongside fellow Scotsman, Conor McAdam. Being second seeds we we managed to get to the final where we played a combined team of Romania/Greece. It was a tough start as we lost the first two sets in doubles and had to really dig deep and fight our way back into the match and we managed to level it at 2-2. In the 5th and final set we really dominated the play and managed to get the win, 3-2. With the match score at 1-0 in our favour, I was to play George Mouchthis from Greece. George started the strongest of the two and took the first set, however I managed to successfully change my tactics and take the match 3-1 and crown myself and Conor the Belgian Open Champions!

I feel I’ve had an incredibly successful month, and I’m really looking forward to the Spanish Open in Alicante in November. I’m also really excited to find out my new world ranking after my success in Belgium. At 21 in the world at the moment, a top 18 position would put me in a great position to qualify for the 2018 World Individual Championships”