September continues to demonstrate that, despite the expected turbulence of Brexit, the UK is continuing to grow, and property investment is still considered a sensible choice, especially for those nearing retirement age, or those lucky expats in the UAE with a tax free pension pot to put to good use. To learn more about UK property investment, click here.

The Economist noted this month that, despite many negative warnings about the economy post Brexit, the buy-to-let property market is remaining buoyant, and investment into the UK doesn’t seem to be suffering. The key points of the article are:

The Telegraph has reported that London house prices have registered their first annual decline in eight years – making the capital the worst performing region in Britain. The same article reports on the Hometrack house price analysis, which demonstrates fantastic growth for property in Manchester, Birmingham and Edinburgh. The below graphs demonstrate the changes shown in the UK house prices: 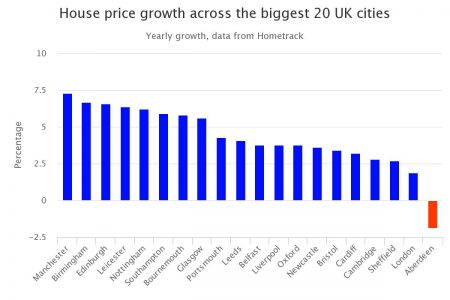 In a study featured in the Financial Times this month, it was stated that more than 1 in 10 people look to invest in buy-to-let property after they retire. The potential amount of new landlords could equal as many as 1.3 million. The main reasons given for investing in property were:

Remember the double tax agreement between the UK and UAE? Back in February, it was announced that UK expats over 55 can cash out their pension pots tax free. Click here to for more investment advice!

Property Investment is booming in Manchester

Manchester has been touted, by Landlord News, as the ‘Next Silicon Valley’, due to its high number  of employees in the tech industry and the expansion of Media City (the home of ITV, Channel 4 and the second home of BBC).

Buyer Demand Continues to Trend Upwards Across the UK

Property Wire has reported on survey results which suggest buyer demand in the UK is showing no sign of slowing. The survey suggests that the current imbalance between supply and demand of properties has stoked up buyers’ interests, which when combined with climbing prices, demonstrates that the property market is still continuing to perform. Some specifics of the results are:

London fails to perform as buyers turn to regional cities

September showed the biggest drop on asking prices in London this decade, according to The Guardian. This slump is not mirrored in regional cities, with the East and North of England all continuing to rise. The stand out figures between September 2016-2017 are as follows: